I am finally on the boat to France! A week later than expected, but the sun is shining and the sea is calm and I am as ready as I’ll ever be to start the real adventure of this trip. Already my departure from Glossop on 17th Jan seems like a long time ago. It was a brilliant send off, I was really touched by how many folk turned out to see me off (or make sure I was actually gone at long last – delete as appropriate). Nothing quite prepared me for the honour of having a 17 (wo)man lead out train!! Despite leaving in a rush (was it ever going to be any other way?) I somehow managed to pack everything essential onto the bike, along with lots of probably non-essential stuff. It took a while to get the hang of steering such a heavily loaded jalopy like that – hardly anyone who tried could even lift the rig off the floor in the Co-op! – but I didn’t fall over and indeed made it, albeit exhausted, to Steve’s in Staffordshire on Saturday night. Thanks to everyone who turned out on foot and on their bikes. Special thanks to Mike and Mark who shepherded me all the way to Steve’s door – I’d have been at least an hour longer without your navigation and necessary pacemaking after the slow start to the day. 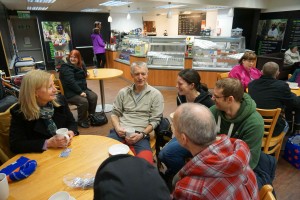 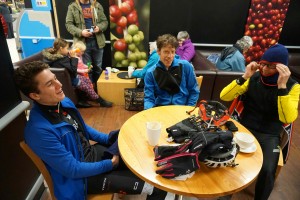 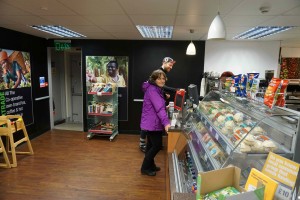 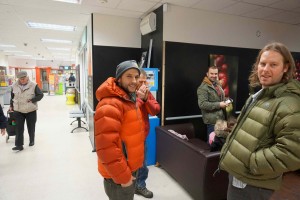 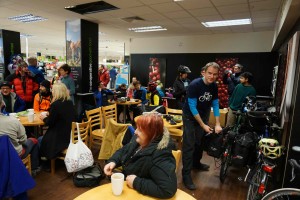 After the customarily brilliant hospitality at Steve and Claire’s, I pedalled out with Steve the next morning, down the foggy lanes past frozen hedges and fields. Once we crossed the A5 I was off alone cycling at my own pace, and noticed that it immediately felt easier. I had a pretty uneventful but efficient ride down through the rolling Midlands countryside to spend a couple of pleasantly restful days catching up with my sister Katie and her family and my mum. Then another uneventful, faster ride down the rainsoaked A-roads to Bristol for a lovely evening with my dear friends Finn and Phoebe and their little girls. By that point I was already feeling stronger, although dumping 3kg of laptop, charger, harddrive and drinking the whiskey (thanks MT!) at Katie’s might have contributed to the easier pedalling. Thursday 22nd I covered 69 miles with a hilly finish into Bridport to arrive at my dad’s feeling great! The cycling felt natural and I was confident of being able to sustain 70 to 80 miles once I crossed the Channel, assuming an earlier start time than long farewell breakfasts had allowed for so far.

The next morning I woke up with the tell tale signs of an imminent stinking cold. And lo, so it came to pass. Not fancying cycling and wild camping with a head full of catarrh in freezing rain and wind, I deferred getting the ferry on Monday to the next crossing from Weymouth on Friday and spent the week finishing off my to do list – buying more spares for the bike, another hat (a fur lined deerstalker – I think I have 5 with me now, plus 2 buffs and one of those cycle crash hat things!), and various other bits and bobs that needed wrapping up. By Thursday my health was much improved, but the wind had picked up again and right on cue the Friday ferry was cancelled. Casting about for a plan B, complicated by needing to get out of my old man’s place by the weekend, I decided the best option was to hang fire for the next crossing from Weymouth on Monday (today) as the forecast was promising, and I couldn’t see the point in riding two days up to Portsmouth just to get an overnight ferry that go me there a day earlier, but almost certainly in a state of absolute exhaustion. I found a couple of www.warmshowers.org families who kindly took me in for the weekend, and a new friend, Huw, in Bridport who accompanied me on the ride over to Weymouth yesterday for a final send off. As a newbie to warmshowers.org, I have to say the generosity and good company I enjoyed at both Malcolm and Jude’s in Bridport and with Matthew and family in Weymouth was heart-warming and gave the next daunting stage of my trip the best possible send-off. Thank you all so much!

So here we are, bang up to date. I am somewhere between Guernsey and Jersey, so I have to get off and change boats in a minute to one that will take me on to the port of St Malo, where I hope to find a nice secluded spot to pitch my tent before it goes dark. I’ve checked on Google satellite view and there are a few likely looking prospects, either in the woods near the Cite d’Alet campground or up in the dunes on the north coast towards Cancale. I’m sure it’ll be lovely. It is still pretty chilly, below zero last night, and I’m still coughing and wheezing a bit, but it’s small beer in the great scheme of things – I’ve got a couple of good down sleeping bags and lots of good camping and sleeping gear. I must remember to read the instructions on how to fire up my petrol stove on the next boat though!

For those interested in such things, I had a bit of a weigh in yesterday. If Jude and Malcolm’s scales are to be believed I am setting off at 75kg (12 stones – a stone heavier than this time last year; thanks for all the mince pies and cheese everyone – the buffer is now in place!!); the bike + bar bag + fuel (no water or tea in the flask) came in at 23kg; my luggage (2 front panniers, 2 rear panniers and a dry bag on top of rear panniers) tipped the scales at 36kg. I’ll post a kit list sometime when I have my stuff with me (it’s down in car deck now).

Here’s hoping this northerly wind keeps up for a few days at least to get me started! (but not too strongly at nights 😉

PS – the Jersey to St Malo ferry did not have wifi!! So this post is a bit later than planned.

A Path with a Heart

The Sirens of Baja